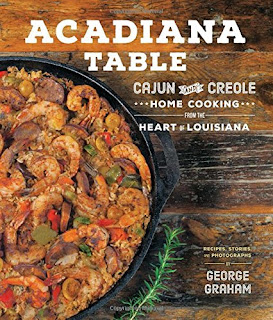 George Graham of Lafayette loves Louisiana cooking. He hails from a restaurant family and worked in one himself and has written extensively about Cajun and Creole cooking in addition to being a finalist on TV’s “Food Network Challenge.” His blog, “Acadiana Table: George Graham’s Stories of Louisiana Cooking and Cajun/Creole Culture,” is as beautiful as it’s informative, was a finalist for Best Food Blog: Regional Cuisine in Saveur magazine’s 2014 Best Food Blog Awards and also for Best Food Blog in the 2015 IACP Digital Media Awards.

So it’s no surprise that Graham now has a cookbook under his belt. “Acadiana Table: Cajun and Creole Home Cooking from the Heart of Louisiana: Recipes, Stories and Photographs” has just been released by Harvard Common Press. Like Graham’s blog, it’s as gorgeous as it’s educational, perfect for a coffee table as well as a kitchen. And also like Graham’s blog, the book addresses traditional Cajun and Creole dishes such as crawfish bisque, Creole shrimp and andouille jambalaya, courtbouillon and étouffées. But there’s innovative recipes too, such as stuffed turkey wing gumbo, snapping turtle sauce piquante or smoked quail stuffed with syrup sausage and muscadine sauce. Sprinkled throughout the book are slices of local history, cooking techniques — even the “pride of speaking French.”

Graham signs “Acadiana Table” from 11 a.m. to 1 p.m. Wednesday at Renaissance Market in the Oil Center and from 5 p.m. to 7 p.m. Thursday at Caroline and Company, both in Lafayette. He’ll also sign copies from 1 p.m. to 3 p.m. Sunday, Nov. 20, at Barnes & Noble–Perkins Rowe in Baton Rouge.

Other cookbooks to consider this holiday season — and don’t worry, there’s more recommendations to come between now and Christmas.

From 1 p.m. to 3 p.m. Saturday, Nov. 19, James Beard Award-winning Chef Jeremiah Tower will read from and sign his new book, “Table Manners: How to Behave in the Modern World and Why Bother” at the Southern Food & Beverage Museum in New Orleans. In his newest book, Tower discusses the idea of proper etiquette and offers readers a list of do’s and don’ts for today’s society. Tower's first book, “New American Classics,” won a James Beard Foundation Award in 1986 for “Best American Regional Cookbook.” In 1996, he won the Foundation’s Award for the “Outstanding Chef of the Year.” Museum admission is $10.50 for adults, but those who purchase a book will receive complimentary admission.