Cookbook Thursday: In the kitchen with Kevin Belton

Chef Kevin Belton has been showing viewers how to cook New Orleans style in all its diversity in a 26-part cooking series produced by WYES-TV of New Orleans, “New Orleans Cooking With Kevin Belton.” 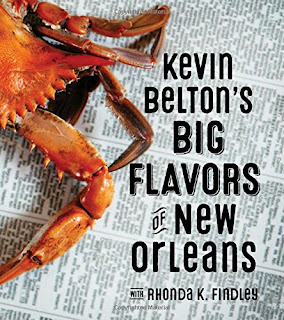 Belton, whose mother’s family hails from the French-Caribbean island of Martinique and his French-speaking father’s family came from the Bayou Lafourche area of South Louisiana, near Thibodaux, is a self-trained chef. He’s spent the last 20 years teaching Louisiana cooking at the New Orleans School of Cooking and throughout the U.S. and Canada. Belton has been a featured chef and guest on numerous food programs including “Emeril Live,” “Ready Set Cook,” “Taste of America” and “Eating in the Bayou.” In 1999 he was co-host and chef on the BBC series “Big Kevin, Little Kevin,” which also featured British celebrity Chef Kevin Woodford. Belton co-authored a companion cookbook titled “Big Kevin, Little Kevin-Over 120 Recipes from around Britain and America by TV’s Odd Couple,” which was published by Ebury Press.
Belton is a past recipient of the WYES President’s Award, and in 2014 he was recognized as one of the top 30 Louisiana chefs by the American Culinary Federation.
Belton has recently published a cookbook with Rhonda Findley titled “Kevin Belton’s Big Flavors of New Orleans,” which shows readers how to make a roux, the holy trinity of celery, onion and bell peppers and much more. Findley is the author of several New Orleans-centric books including the best-selling “100 Greatest New Orleans Recipes of All Time” and “New Orleans Unleashed.”
The following is a sample recipe with Belton’s description of its origin,

Miss Magnolia Battle’s Southern-Style Butter Beans
“My Grandmother Nan’s given name is Magnolia Battle. Doesn’t that just ooze character and charm? Believe me; she lived up to her name. There was just something about the creaminess of the butter bean after Nan cooked it. The smell and the flavors just take me way back to our kitchen on Valance Street.”
Serves 6 to 8
1 (16-ounce) package dried butter beans
1 cup chopped onion
4 tablespoons butter
8 ounces pickled meat, cut into chunks
4 cups vegetable stock
4 cups chicken stock
1 bay leaf
1 teaspoon kosher salt
1 teaspoon freshly ground pepper
Directions: Rinse and soak beans, covered, for about 4 hours in the refrigerator. Or overnight, if possible. In a large heavy-bottom saucepan, sauté onion in butter until translucent, about 5 minutes. Drain beans. Add pickled meat and beans. Combine vegetable and chicken stocks in a pitcher. Add enough combined stock to cover the beans and add bay leaf. Bring the beans to a slow boil, reduce heat, and simmer. Cover pot loosely. Check every 15 minutes to add stock to just cover the beans. Resist the urge to stir the beans as it will cause the tender beans to split apart. Continue to check the liquid level and cook for about 1 1⁄2 hours. Season with salt and continue to simmer until beans are tender, about an additional 30 minutes. Gently remove beans to a serving dish and discard meat. Season with salt and pepper, gently stirring, and serve.

Tips and Suggestions
Find that fine line of stirring to keep the beans from sticking but not over-stirring to the point where the tender bean falls apart. I really don’t mind if the butter beans split apart a little bit. That just adds to the creaminess. Find the balance that works for you.

Cheré Dastugue Coen is the author of several Louisiana romances under the pen name of Cherie Claire. She is also the author of “Forest Hill, Louisiana: A Bloom Town History,” “Haunted Lafayette, Louisiana” and “Exploring Cajun Country: A Historic Guide to Acadiana” and co-author of “Magic’s in the Bag: Creating Spellbinding Gris Gris Bags and Sachets.” Write her at cherecoen@gmail.com.
Posted by Louisiana Book News at 8:39:00 AM