Ellen Urbani's 'Landfall' a heartfelt story about Katrina, the complex layers of motherhood

Rosy Howard survives the horrors of Hurricane Katrina only to be separated from her mother, her only family member, who suffers from mental illness. In a desperate attempt to locate her mother, Rose travels to Alabama in search of her dead father’s family. 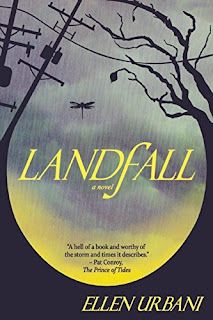 In Tuscaloosa, walking on the side of a road, Rosy is involved in a tragic accident with Rose Aikens and her mother on their way to deliver a carload of Katrina supplies. It’s an event that will lure Rose, now an orphan, to Louisiana and back, learning of both Rosy’s life and her own, all the while sharing a pair of sneakers.
Ellen Urbani’s comtemporary historical novel “Landfall” delivers a elegant, insightful look into the lives of two young women, the complexities of motherhood and “the idea that at any given moment any one of us could be engaged in something that someone might one day consider miraculous and we don’t even know it,” Rose tells her mother in one scene. Without giving too much away, “Landfall” is a heartfelt search by a guilt-ridden and confused woman, dissecting that intricate bond between mother and child.
“The closer she got to Rosy’s family,” Urbani writes, “the more she seemed to crash headlong into comtemplation of her own.”
Urbani also offers a thought for those suffering through traumatic events such as hurricanes and senseless shootings in movie theaters; I know I took comfort in what her character used to ease her pain. “Let me not pray to be sheltered from dangers, but to be fearless in facing them. Let me not beg for the stilling of my pain, but for the heart to conquer it.” Beautiful words as we relive Hurricane Katrina’s 10th anniversary.
Urbani hails from Alabama and is the author of the memoir “When I was Elena.” She will sign her remarkable novel Saturday at the Books-A-Million in Alexandria and at 6 p.m. Monday, Aug. 24, at Octavia Books in New Orleans.

New releases
Six days after Katrina hit New Orleans, a group of people who had stayed behind attempted to cross the Danzinger Bridge over the Industrial Canal in an effort to escape the city’s devastating floodwaters and find food and shelter. They were met by police who had also remained in the city, a group trying to control the chaos that followed the storm. What happened on that fateful Sept. 4 makes up “The Shots on the Bridge: Police Violence and Cover-Up in the Wake of Katrina” by Associated Press investigative journalist Ronnie Greene. Several of the residents were killed and injured in the standoff, while members of the New Orleans Police Department and their supervisors told a different story.

Before joining AP, Greene edited a 2014 Pulitzer Prize–winning investigation for the Center for Public Integrity. Greene spent much of his career at the Miami Herald and is author of “Night Fire: Big Oil, Poison Air, Margie Richard’s Fight to Save Her Town.”
Fatima Shaik has published a collection of stories regarding Hurricane Katrina’s effect on New Orleans titled “What Went Missing and What Got Found.” She will launch her book at 6 p.m. Tuesday at Octavia Books in New Orleans. Shaik’s work has appeared in the Louisiana Review, Callaloo, Tribes and others. She is included in several anthologies of African-American literature including “Breaking Ice” by Terry McMillan and is the author of four books set in New Orleans, including fiction for young adults and children.
Editor Cynthia Joyce has produced a collection of work published on the Internet following Hurricane Katrina in “Please Forward: How Blogging Reconnected New Orleans After Katrina.” Dave Eggers says of the book, “This is an essential document of the state of mind of New Orleanians before and during and after Katrina. It’s raw, it’s pained, it’s outraged, it’s heartbroken — all the things it should be.” Joyce and contributors Deborah Cotton, Bart Everson, Michael Homan and others will read, discuss and sign the book at 6 p.m. Thursday at Octavia Books in New Orleans.

Believe it or not, Katrina was not the country’s deadliest natural disaster, although the final tally is up for debate. Al Roker from NBC’s “Today” and the Weather Channel writes about the Galveston storm of 1900, in which massive winds and storm surge devastated the island, killing thousands of people in “The Storm of the Century: Tragedy, Heroism, Survival, and the Epic True Story ofAmerica's Deadliest Natural Disaster: The Great Gulf Hurricane of 1900.”
It may be too early for Christmas but Santa’s dealing with a hurricane in “The Legend of Peli Claus” by Nolan “Joey” Pellerin and illustrated by Stefan Jolet. A major hurricane devastates Louisiana in 1856 and things look bleak for Christmas that year, but Santa and a little brown pelican named Peli Claus save the day. The book is available at the Acadian Village General Store.

Book events
Irish Cooper discusses her recent book, “Fabricated Looks: My Memoir,” from 10 a.m. to 11 a.m. today at the Scotlandville Branch Library in Baton Rouge. For more information, visit http://www.ebrpl.com/.
Lyrically Inclined Poetry Slam and Open Mic, hosted by Poetic Soul, will be at 7 p.m. Tuesday at Black Café, 518 S. Pierce St. in Lafayette. Doors open at 6 p.m. Cover charge is $5.
The Historic New Orleans Collection will offer a panel discussion with local artists and writers for its latest book release and accompanying exhibit, “The Katrina Decade: Images of an Altered City” from 3 p.m. to 6:30 p.m. Saturday at the THNOC’s dedicated art gallery, 400 Chartres St. The book is by photographer David Spielman. A reception will follow the presentation.
Author S.M. Schmitz will sign copies of her paranormal romance series, “Resurrected,” set in Baton Rouge, from 10 a.m. to 11 a.m. Saturday at the Jones Creek Branch Library in Baton Rouge. For more information, visit http://www.ebrpl.com/.
Nancy S. Brandt, author of “Pigsty Princess” and “Sword & Illusion,” will speak on story structure using The Hero's Journey and three-act structure at the Heart of Louisiana Romance Writers of America meeting beginning at 10 a.m. Saturday at the Fairwood Regional Library of Baton Rouge.
Posted by Louisiana Book News at 6:00:00 AM